Introduction: Pulmonary tuberculosis (TB) is caused by Mycobacterium tuberculosis and has infected one-third of all human populations around the world, so it has been a global problem. Smoking is one of the risk factors that cause a high mortality rate in TB sufferers. Aim of study: This study aims to evaluate the relationship between smoking behaviur and the incidence of Pulmonary TB in the Kenjeran’s Primary Health Center 2017-2018. Method: This study is observative analytic research with a cross-sectional design. The population in this study were Pulmonary TB in the medical record of the Kenjeran Health Center in 2017-2018. The sample was taken based on the purposive sampling method. 71 people were suffered from pulmonary TB obtained as samples. Results and Discussions: The results of the statistical analytic stated that there was no significant correlation between smoking and the incidence of pulmonary TB, the p-value was 0,601 found in the data analysis (p > 0,05). From 71 respondents, 56 respondents (80,3%) were BTA + patients and 15 respondents (19,7%) were BTA - patients. Based on smoking behavior, there were 56 respondents (78,9%) non-smokers. Based on most sexes, 50 respondents were male. Based on the age group, most of them were in the 17-35 years, amounting to 44 respondents (62%). Conclusions: The conclusion of this research is that there is no relationship between smoking behavior and the incidence of pulmonary TB in the Kenjeran Primary Health Center in 2017-2018.

This work is licensed under a Creative Commons Attribution-NonCommercial-ShareAlike 4.0 International License. 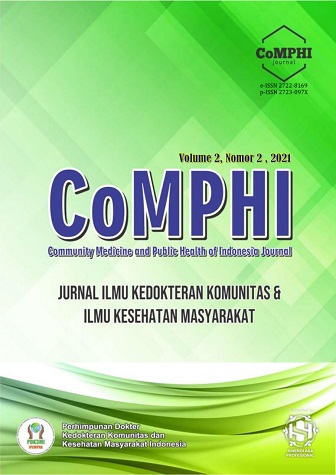